Politics – What’s Recovery Got to Do With It?

Not only do politics play a role in our trauma and what we’re recovering from, but it can also impact how we heal.
– Kelly Fitzgerald Junco 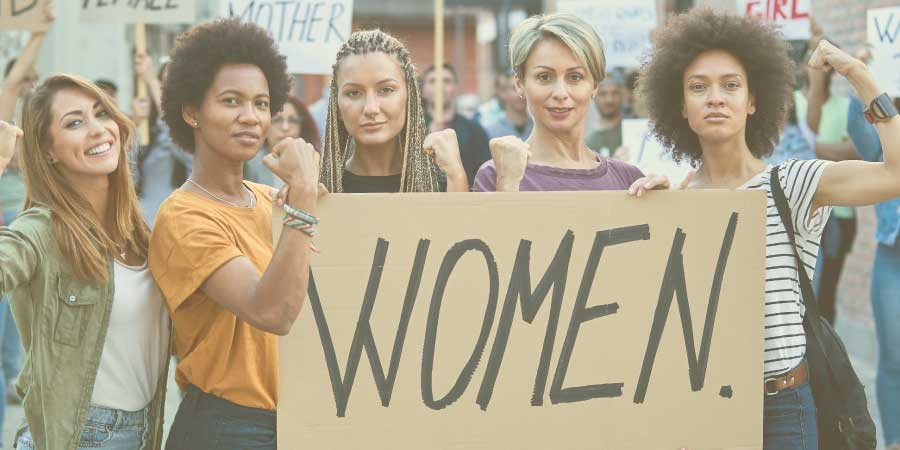 Politics often gets a bad rap, and rightly so, as it can be triggering for so many. We often hear that we shouldn’t talk about politics with strangers and definitely shouldn’t bring it up in recovery circles. While I understand the sentiment, the reality is that politics and its consequences can have a deep impact on those who are healing in recovery. A simple definition of politics is “the set of activities that are associated with making decisions in groups, or other forms of power relations between individuals, such as the distribution of resources or status”*. The power dynamics, decisions, and sets of activities related to politics are the reason many women have sought healing and recovery for themselves. Some members of the SHE RECOVERS community are recovering from racial injustice, discrimination, oppression, institutional abuse, or being under the power of individuals and institutions who didn’t protect their rights as a woman or a human.
These experiences can cause re-traumatization, grief, triggers, moral injury, and fear, just to name a few. When we are open and honest about these feelings and situations, we understand that politics has everything to do with recovery. It is our responsibility as a trauma-responsive organization to provide our community members with spaces to talk openly and honestly about the impact of politics as it relates to their recovery. While some recovery circles might assume politics is not a part of recovery, we acknowledge and recognize that it absolutely is.
The truth of the matter is we all live and function under a patriarchal system. Patriarchy is defined as “a system of society or government in which men hold the power and women (and members of the LGBTQ+ community) are largely excluded from it.” As an organization, we recognize this and welcome those who may be recovering from the consequences of this type of system. Living under a patriarchal system also stigmatizes substance use. For example in the journal Perspectives on Social Work, it was reported in the study, The Influence of Patriarchy on Elder Female Substance Abuse, “Central to patriarchy is the premise that the female experience is disenfranchised. Evidence of this can be seen in the harsh, moralistic stigma applied to women who abuse substances, but not to men. Even though stigma can act as a deterrent to a woman for developing a substance use disorder, stigma can also act as a barrier to accessing treatment for a woman who is already engaged in substance abuse.”
Not only do politics play a role in our trauma and what we’re recovering from, but it can also impact how we heal. In the United States, many addiction treatment centers rely on the health insurance system to function and folks seeking recovery may not be able to get the treatment they need if they don’t have insurance or are otherwise unable to pay for the cost of treatment. Because of this, the process of recovery is sometimes perceived only as a medical issue with focus placed on the physical aspects of recovering, and not the holistic and human issue it actually is. SHE RECOVERS believes recovery is a journey to wholeness through taking care of our mind, body, and spirit. That’s why it’s part of our mission to make recovery accessible to all women who need it.
We believe in a world where recovery is available for all who want it and that the system of power associated with politics no longer makes such a devastating impact on humans who will later need to heal from its consequences. We also believe in co-creating a welcoming space where everyone feels as comfortable as possible sharing their hardships and their triumphs.
While we know that recovery is not all about politics, we acknowledge that it does play an important role. We also encourage every person in our spaces to practice personal agency and take care of themselves if they may hear or see something that could trigger a trauma response or memory.
Politics – What’s recovery got to do with it? Everything!
*SHE RECOVERS Foundation does not endorse or oppose any particular political party.

Connecting one-on-one with a therapist may be a great place to start. SHE RECOVERS Partner BetterHelp provides a network of licensed, accredited, and experienced therapists who can help you with a range of issues including substance use, depression, anxiety, relationships, trauma, grief, loss, and more. BetterHelp is providing the SHE RECOVERS Community with a 35% discount on the first month of therapy.

CONNECT WITH A THERAPIST TODAY

This site uses Akismet to reduce spam. Learn how your comment data is processed.

Shelly Dimitrijevic’s professional and philanthropic activities have always focused on improving the lives of others. She began her nursing career at Cardinal Glennon Children’s Hospital in St. Louis and went on to become a LifeFlight nurse specializing in neonatal, pediatric, and cardiovascular intensive care.

Shelly has been involved with numerous charities focusing on children and education including the Charlee and the Chocolate Factory gala, The Venus Orbit, Design For A Cure, Jackson Memorial, and Impact Oasis. In 2010 she founded the Lotus program, a program that focused on educating parents on the nutritional needs of children and basic child development. Shelly also served on the Frost Science Museum gala committee for 7 years before Co-Chairing the event in 2015.

After a diagnosis of Celiac disease and subsequently receiving Certification as a Nutritional Consultant, Shelly recognized that topically applied products have an effect on her Celiac Disease and overall health. She turned her focus to developing skincare that was free of toxic and hormone-disrupting ingredients.

Since she lost her only sibling in 2012 Shelly has been determined to find a way to contribute to the recovery community in a way that can make a great impact and ensure that others have the resources necessary when they are struggling.

Shelly's substantial contributions to SHE RECOVERS of both time and resources have been instrumental and deeply appreciated.

As a result of being introduced to SHE RECOVERS through retreats and meet-ups, Kirsten will be starting her yoga teacher training in the fall. These retreats also led her to become more deeply involved with SHE RECOVERS in a volunteer capacity. Kirsten was instrumental in setting up some of the Foundation's grassroots groups and currently volunteers her time helping SHE RECOVERS Foundation to design and implement the Volunteer Chapter Network. Kirsten and her husband recently moved from Southern California to Roswell, Georgia to be closer to Kirsten's sister and two young nieces. When she isn't spending time being an aunt, you can find Kirsten hanging out with their rescue Labrador or exploring their new state.
×

Mary Beth is a founding member of SHE RECOVERS Support for Legal Professionals and is active at the local level with SHE RECOVERS in the Bay Area. Mary Beth has been living a sober life in recovery for over 26 years. She also has a history of trauma and abuse, from which she’s worked hard to recover as well. 6 years into her recovery, Mary Beth attended Berkeley Law. She worked at a large firm in Silicon Valley, then litigated class actions for the federal government. In 2014 Mary Beth was appointed an Administrative Law Judge. She recently retired, so she could devote her time to completing her writing and being more active in the recovery community.

She regularly speaks on behalf of LifeRing and develops relationships with organizations supportive of the multiple pathways approach. In August 2020, Mary Beth had an op-ed published in the Wall Street Journal, I Beat Addiction without God, where she described building a personal recovery plan by combining ideas from LifeRing, Women for Sobriety, and Narcotics Anonymous. In November 2020 she had an op-ed published in the Philadelphia Inquirer, I was a federal judge, and I support Safehouse. Here’s why. She is currently working on a full-length memoir.

Taryn Strong is a founder of SHE RECOVERS® Foundation as well as a trauma-informed yoga instructor, recovery coach, aromatherapist, and herbalist (and daughter to Mama Dawn). Taryn has developed a unique yoga retreat program and led over 40 yoga for recovery retreats since 2012. She is also the host of the SHE RECOVERS Podcast and most recently created and taught the inaugural trauma-informed SHE RECOVERS Yoga Teacher Training Program. Operating from a trauma-informed lens and a firm believer in anti-oppressive practices, Taryn brings an empathic and invitational approach to healing - empowering women to find and follow individualized pathways and patchworks of recovery.

Taryn's courageous vulnerability and passion for recovering out-loud has made her an influential voice in the global recovery movement - smashing the stigma often associated with substance use and mental health issues. Taryn creates and lives with her beloved and two dogs within the ancestral and unceded traditional territory of the Hul’qumi’num and SENĆOŦEN speaking peoples (Saltspring Island).

Susan is an architect of hope and healing with over 30 years of experience in providing executive-level leadership to heart-centered teams in the non-profit realm. Since joining SHE RECOVERS® Foundation as Executive Director in April 2020, Susan continues to weave her experience with her passion to help other women receive what she has been so graciously given – long-term recovery from substance use disorder, body image issues, codependency, perfectionism, and moral injury.

Susan’s work in the treatment industry quickly revealed how stigma kept women struggling with mental health issues and addiction from seeking help, and the lack of resources available to them once they did.  Having served as a founding employee of Susan G. Komen for the Cure for 20 years, playing an integral role in creating the global grassroots movement that changed the way breast cancer is talked about and treated, she felt called to utilize that experience to do the same for women struggling with mental health and substance use disorders.

Celebrating more than 27 years of continuous sobriety, Susan is a Certified Peer Support Worker (CPSW) in the state of New Mexico to provide resources and peer support to those in or seeking recovery.  She lives in Santa Fe, New Mexico with her fur family of four, Alex, Chaco, Bodhi, and Gracie.

Dawn Nickel, Founder of SHE RECOVERS® Foundation, is a thought leader in the women's recovery sphere as well as an accomplished leader, dedicated researcher, and visionary in the recovery moment. She holds a Ph.D. in health care policy with extensive experience in researching and writing about women experiencing substance use disorders, mental health challenges, and intimate partner violence. Dawn started her own journey of recovery from a substance use disorder and domestic violence in 1987. She is also in recovery from anxiety, grief, trauma, overworking, and cancer. Dawn's tell-it-like-it-is wisdom has created a ripple effect where you will often hear her quotes "the shit you did is just the shit you did - it's not who you are" and "recovering from all the things" resonating throughout many recovery realms.

Currently working on her first book, Dawn is living proof that in a world where all women in or seeking recovery are celebrated, supported, and deemed essential to healthy communities - anything is possible. She is fondly referred to as Mama Dawn in the SHE RECOVERS Community and to her daughters Taryn and Ashley. Dawn lives, works, and plays with her beloved grandchildren on the traditional territories of the Lkwungen speaking peoples on Vancouver Island.

Join the She Recovers movement!

For news about upcoming events & retreats, new products, amazing articles and so much more, sign up for our newsletter.

You have Successfully Subscribed!